Valencia, the name itself brings up images of Sun, Oranges, and Sand. Valencia enjoys 320 days a year of glorious sunshine. It is a Perfect place to live and be outside enjoying the River Gardens, sitting at a cafe or exploring the mountains and fields that surround the city.
From its Roman founding over 2000 years ago it has been fiercely contested over as a most desirable place to live. The Romans, Visigoths, Moors and Christian Kingdoms all fought over the sunny fertile plain that makes up and surrounds Valencia.
Valencia is a proud city. The original Latin name of the city was Valentia, meaning “strength”, or “valour”, Today it represents the essence of contemporary Spain—daring design and architecture along with experimental cuisine—but remains conservative and proud of its traditions.

Modern Valencia was best known for its flooding disasters until the River Turia was diverted to the south in the late 1950s. Since then the city has been on a steady course of urban beautification. The lovely bridges that once spanned the Turia look equally graceful spanning a wandering municipal park, and the spectacularly futuristic City of Arts and Sciences designed by Valencia born architect Santiago Calatrava, has created an exciting architectural link between the city center and the Mediterranean. Valencia has transformed itself in the last decade. Important International events like the 32nd and 33rd America’s Cup and the European Gran Prix have put Valencia on the map as a major destination. They have also helped transform the Port and surrounding area as a lively destination place in its own right. 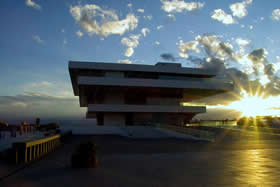 Valencia is the 3rd largest city in Spain and has all the cultural, educational and gastronomic benefits of a large city but still is a city of Barrios. Each like its own small pueblo or village with a friendly easy going cafe lifestyle. It is city where you are more likely to wake up to church bells and birds singing than traffic and urban noise. Valencia unlike its larger siblings Madrid and Barcelona still maintains an authentic Spanish lifestyle while it has grown into a vibrant modern city.

Few places in Europe can boast about the affordability of properties, either to rent or to buy as in Valencia. Prices have dropped all over Spain and Europe but Valencia has always been an affordable place to live now even more so.. High end houses with a garden, pool and all amenities cost less than a small flat in Madrid and Barcelona. Houses in the exurbs have lush gardens and are a safe friendly place to live.

It is a fantastic place to raise a family. There are numerous play areas, the fantastic BioPark Zoo and Oceanagrafic Aquarium are sites to see again and again. There are easy connections to most European capitals and even a direct flight to the United States. High speed rail reached Valencia in 2010 and Madrid is now only an hour and a half away by train. The mountains are 15 minutes by car and beaches abound, from the expansive, well groomed Las Arenas and Malvarosa beaches in the city to the peaceful naturalism of the nearby undeveloped shore.

At Perfect Spain we are of course biased as we come from Europe, the Americas, Asia and Australia, and all chose to live here. Come visit and see for your self. All in all Valencia is a Perfect Place to be.